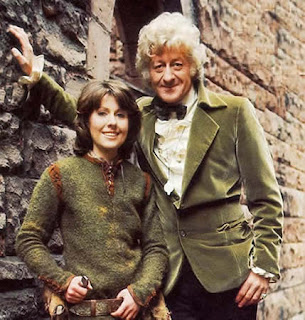 This week’s auction at Bonhams has a real star item on offer: for me it’s not the cape Christopher Lee wore as Dracula in the classic Hammer Films, but the green velvet smoking jacket worn by Jon Pertwee in a handful of stories.

The catalogue listing states it was worn in The Time Warrior, which it was, but this was its last outing.
It first appeared in Carnival Of Monsters, and was worn again in Frontier In Space, before briefly appearing in the openings of both Planet Of The Daleks and The Green Death. 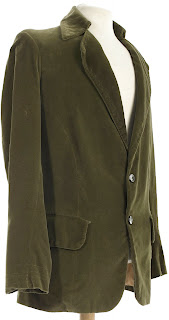 With the jacket in the viewing, how can I resist the chance to see it close-up.

This is the first time I have ever had the chance to see an original screen-used Pertwee jacket to touch.

It was smaller than I had imagined, and was showing its age at the corners. I was surprised to find it has a peach coloured silk linking.

It was a great opportunity to get some detail photos, and here is a montage of the best ones I took. 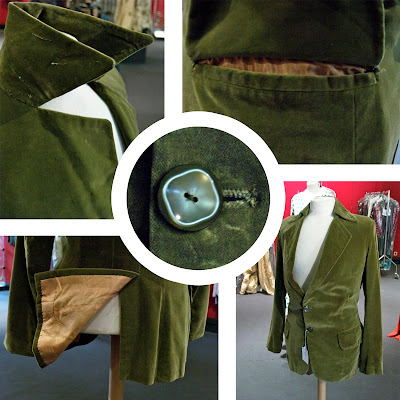 This coming week there is an auction at Bonhams in Knightsbridge of Film and Entertainment memorabilia.

Amongst the James Bond and Beatles items (and Christopher Lee’s original cape from his first Dracula film) are a number of original Doctor Who costumes, some dating right back to the very first season in 1964.
Also on sale are three Doctor costumes; one from Jon Pertwee’s last series; Jon Pertwee’s jacket when he appeared in the Children In Need special, Dimensions In Time; and a near complete Colin Baker outfit (sadly missing the coat).

This is an opportunity I can’t miss, if not to bid, but to at least go along to the viewing and take a closer look, and maybe some decent photos.

Ironically I have just done a replica (to a slightly different pattern) of the Six trousers, so now I will get the chance to check out my work against the real thing close-up. I will take a swatch of the fabric I used and compare it.

The viewing is Sunday 14th and Monday 15th June, so I will go on Monday and take some more detailed pictures, particularly of the Doctor costumes.

In the meantime, below is a full list of the items on offer, taken from the online catalogue so they can be seen all together and long after the listing on Bonhams will have been removed.

Lot 5
Jon Pertwee as The Doctor from Dr Who: The Time Warrior series, first broadcast December 1973 - January 1974.
A velvet frock coat, of moss green colour, with plastic square shaped buttons, pockets with self flap, lined with orange coloured watered silk.
Footnote:
The Time Warrior series was the first to feature the character Sarah Jane Smith, played by Elisabeth Sladen. The episode is also the first time Gallifray is mentioned as the Doctor's home planet.
This jacket can be clearly seen on screen during the series.
Estimate: £7,000 - 10,000
Sold for £8,400 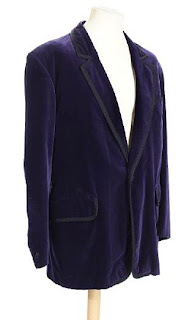 Lot 463
Dr Who: Jon Pertwee's velvet jacket, purple, with matching lining signed and inscribed in black marker by “Jon Pertwee Doc No 3 1994”, lapels and pockets with black braid edging, as worn in the episode “Dimensions In Time”, 1993, together with related letters from Pertwee and a copy of Doctor Who Magazine, 26th December 1990, which includes a photograph of Pertwee wearing the jacket.
Footnote:
Apart from being worn in the 30th anniversary episode, Dimensions In Time, this jacket can also be seen on the cover of the Radio Times, 1993, in the Doctor Who Annual, 1995, in several BBC videos (The Pertwee Years/The Troughton Years), and in the Doctor Who and Panopticon magazines.
Estimate: £5,000 - 6,000
Sold for £5,400

Posted by Steven Ricks Tailoring at 17:38 No comments: