Not strictly Doctor Who related, but issue 100 has an interesting feature about the building of New York’s Twin Towers, including a photo of them being finished off.

Issue 101 saw the start of a new story, Deadly Choice – and a massive change to the comic, when the Countdown name finally disappear forever.

The revamp also saw Doctor Who dropped from its regular place on the cover, having appeared there unbroken for the previous forty-two issues.

In the letter page of issue 101, reader Andrew McGibbon of Twickenham asked to know how the voices of the Daleks were made. 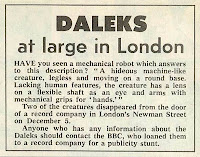 The reply included a call to the BBC Radiophonic Workshop who explained how it was done. The answer makes reference to a picture of a ring modulator in use – but for an unknown reason the picture was not published!

Issue 101 carried news of the theft of two Daleks from outside the offices of a record company on Newman Street on 5th December 1972. The Daleks were on loan to promote the record Who Is The Doctor.

The story carried on in issue 102, with a photograph of one of the missing Daleks.
It also outlined the single featuring the voice of Jon Pertwee, printing some of the lyrics.


I cross the void beyond the mind,
the empty spec that circus time.
I see where others stumble blind,
to seek a truth they never find.
Eternal wisdom is my guide –
I am, The Doctor! 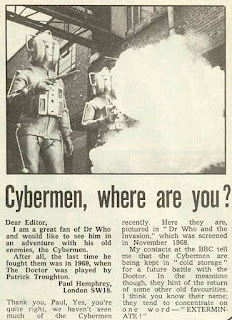 Issue 102 also saw a reference to the Cybermen. It was in the form a of letter from a reader bemoaning the lack of the silver fiends since 1969.

Sadly there was no news of their return to report.

Posted by Steven Ricks Tailoring at 10:59 No comments: