Today it’s picture eleven of Doctor Who Fights Masterplan “Q” - the 15-part adventure on the backs of the Nestlé Doctor Who Milk Chocolate bars.


En route to find authorities to help them, The Doctor and Jo realise they are being pursued by a lumbering beast.
Reaching to a button on Bessie’s dashboard, The Doctor has a plan.

As well as complaints from Jon Pertwee about how he was depicted on the packaging, there were also objections over the depiction of Bessie on the counter display box. Bessie’s number plate is well known as WHO 1. But at the time it was owned by a member of the public, so Bessie's real
number plate, MTR 5 would be switched to WHO 1 when filming. The owner didn’t like his number plate appearing on the packaging, but the BBC said nothing could be done to change it.

Here is a slightly different version of the box side, with the Doctor Who logo stacked horizontally.

Posted by Steven Ricks Tailoring at 16:48 No comments:

Exactly forty years ago this month, Countdown comic had The Doctor concluding Backtime, before starting a new adventure, The Eternal Present! 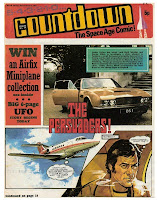 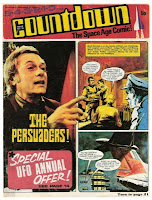 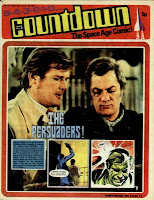 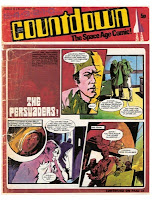 READ MORE
Posted by Steven Ricks Tailoring at 22:58 No comments: