eBay‘s been a bit quiet lately for vintage items from Jon Pertwee’s era - but then this turns up! 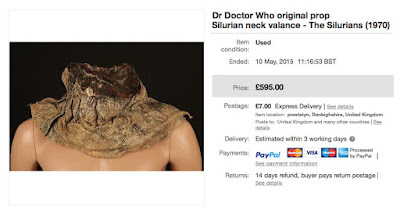 An original costume piece used in the production of the long running BBC science fiction television series Doctor Who.

This neck valance formed part of the costume worn by the reptilian like Silurians in the 1970 serial The Silurians starring Jon Pertwee as The Doctor.

Constructed from a heavy duty canvas material which has been coated with latex and dressed with wood chip giving a textured finish. In a condition fitting of its 45 year age it has hardened into shape with only the lower front section remaining flexible, lacking some of wood chip finish and the tail piece that the ran down the front of the bodysuit it remains an incredibly rare costume element from the original appearance of these recurring monsters.

The valance measures approximately 16" across the shoulders and represents a rare example of an original artefact from the Jon Pertwee era of this classic science fiction television series.
Posted by Steven Ricks Tailoring at 13:56 No comments: