So far I have had a thorough look at the costume combinations worn by Jon Pertwee as the Third Doctor, covering his appearances season-by-season, then in a summary of smoking jackets and inverness  capees.

Following his departure as The Doctor, there were a few more occasions when he donned the velvet smoking jacket and inverness cape.

The Five Doctors
For his first and only return to the role within the official series run, he wore a dark burgundy velvet smoking jacket, with rolled collar and cord-piped edges; a brown tartan Inverness Cape; frilled white shirt; no cravat or tie (see below). 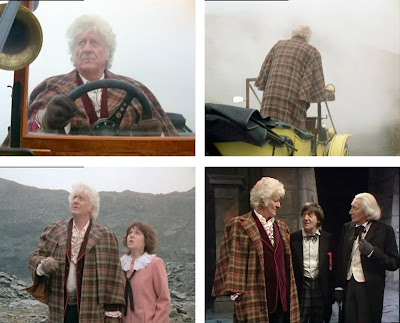 None of this costume was any of the pieces he wore in his original run. The tartan Inverness Cape is not the one first worn in The Curse Of Peladon (see below, left). Note that The Five Doctors cape has two wings (see above, top right), and not a single cloak spanning the back as (see below, left).
Neither is it the one worn only in Invasion of the Dinosaurs, which was a grey coloured tartan (see below, right).

Having gone through The Third Doctor’s entire wardrobe season by season, I thought it would be a good idea to break it down by the two main garments: smoking jackets and inverness capes, listing where they appeared.
This gives a quick reference to which were worn the most. 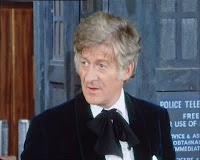 Midnight blue, rolled collar
Spearhead From Space
Doctor Who and the Silurians
The Ambassadors of Death
Inferno
Terror of the Autons
The Claws of Axos
Colony in Space
The Sea Devils 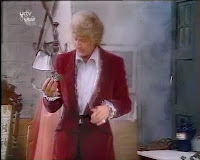 Maroon, rolled collar
Terror of the Autons
The Mind of Evil
The Claws of Axos
The Daemons
Day of the Daleks 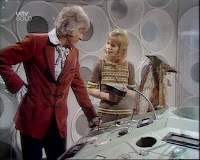 Rust Red, notched collar
The Curse of Peladon
The Time Monster
The Three Doctors
Planet of the Spiders 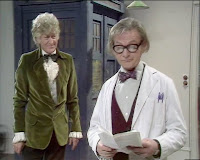 Bottle-green, notched collar
Carnival of Monsters
Frontier in Space
Planet Of The Daleks
The Green Death
The Time Warrior 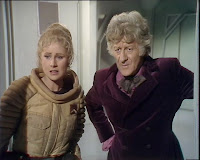 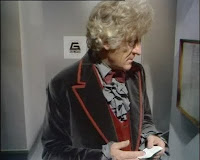 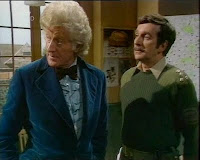 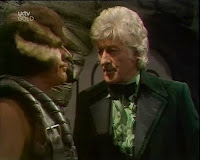 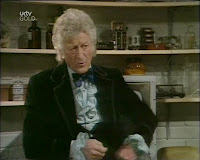 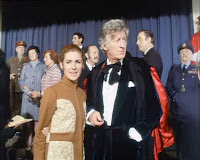 Black, red silk-lined
Spearhead From Space
Doctor Who and the Silurians
The Ambassadors of Death
Inferno
Terror of the Autons
The Claws of Axos
Colony in Space
The Sea Devils 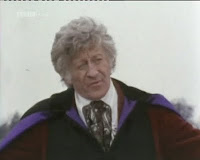 Black, purple silk-lined
Terror of the Autons
The Mind of Evil
The Claws of Axos
The Daemons
Day of the Daleks
The Mutants 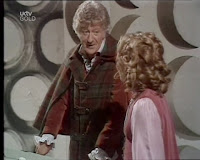 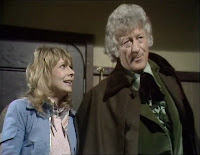 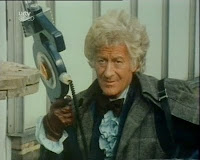 Grey checked, mid-blue lining
Invasion of the Dinosaurs
(Planet of the Spiders as prop) 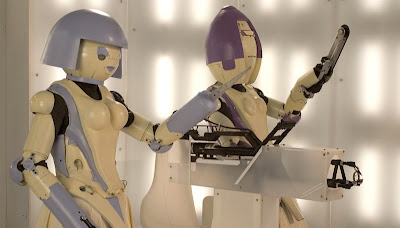 But is The Doctor heading for a regeneration in style?

The Time Warrior
The Doctor kicks off his final season wearing a simple costume of the two-button fronted bottle-green velvet smoking jacket with large collar and lapels, first worn in Carnival Of Monsters the previous year; a frilly apple-green shirt; and dark green velvet bow tie (see below).

NB: The publicity still below shows Jon Pertwee wearing the brown Inverness Cape from Carnival Of Monsters, with the cape draped over his shoulders rather than worn properly. This is an erroneous shot as this Inverness Cape is never worn at anytime during The Time Warrior. 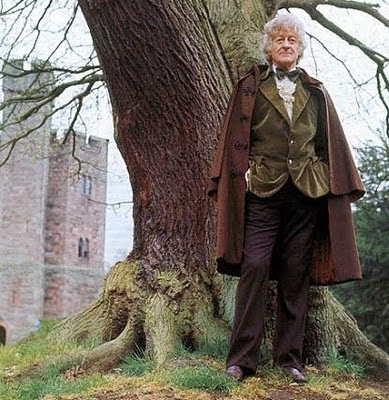