It’s nearly December, and that means yet another Bonhams Entertainment Memorabilia sale.

As usual Doctor Who gets a look in, with a range of eras represented, including a stunningly colourful poster for the second Peter Cushing Dalek film, Daleks Invasion Earth 2150AD.

But the main items on offer cover the now finished spin-off series, Torchwood and Sarah Jane Adventures. Since both these series had the bulk of their runs alongside the Tennant era, I have listed them in my Coat blog.

Here is the only item from the Pertwee era.


Bonhams sale 1793
(12th December 2012)
Entertainment Memorabilia
As usual I have separated the items by Doctor era, and you can see the rest of the items here: 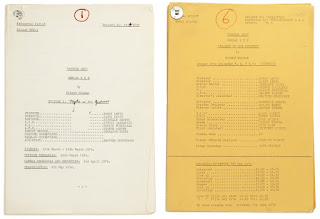 Footnotes
This story was the last to feature Jon Pertwee as the Doctor, ending with his transformation into Tom Baker. These scripts were obtained from a member of the Special Effects team.
Posted by Steven Ricks Tailoring at 09:51