The Inverness Cape Of Doom

The following entry is another one I wrote back in late November last year when I was making my planned Inverness Cape.
I didn't quite get around to finishing and posting it, and it has hung around ever since!


By the end of this posting you’ll understand just why I didn’t complete writing it . . .

Now that I’ve cut the pattern for the Inverness Cape, and done a couple of rounds of calico tests, I can finally start work on a wearable version.

It just so happens I have some chocolate brown moleskin kicking around, left over from a project that didn’t come off (I bought it before discovering the Malabar fabric with the intention of making my then MkII Tennant Coat from it). 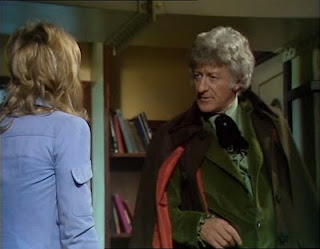 The plan is to use it to make the brown version seen in Carnival Of Monsters  (see right) and Frontier In Space.

It has a burnt orange lining, so this is essential all I need to buy to make it happen.

For once luck is on my side, and within the first couple of Soho shops I look in I find just the right colour and shade of lining I need.


Firstly I need to do the wing. I want there to be a narrow width of facing on the inside front of the wing, so need to cut this, and a separate piece for the resulting lining.
I trace out the front edge of the wing and decide how wide the facing should be, which I then draw. To this shape I add my seam allowance.
I then place this shape over the outer wing shape, and trace the outline of the difference between then, or what will then be the lining. Again I add seam allowance, which runs along the other side of the wing facing edge.

I set about cutting the moleskin for the body of the cape (see above) and the lining (see below). 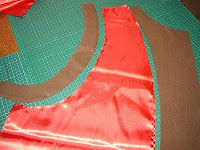 I have cut a lapel and underarm surround to work with the lining (see left).
All I did was draw the style-line I wanted for the seams between the three panels, then traced off each adding its own seam allowance as I went.

Next I set the outer pockets on the front body of the cape. I marked where I wanted them and backed the area concerned with some medium interfacing for extra stability (see below, left).
I then stitch some narrow welts on the front, ready to make the pocket.

Now, it was around this time that things started to go a bit wrong.
Yes – you read that right – things went WRONG!
I had badly underestimated the way the moleskin was handling. It has a short pile, very much like velvet, which is notoriously difficult to work with and has to be handled very delicately and with extreme care.
The problems I was having started with sewing! As the fabric went under the foot on my sewing machine, it left a narrow compressed area parallel to the stitching, which for the life of me I could not revitalize back to how it was.
Furthermore, if I needed to have rightside fabric face down in my machine, the dogs below (the claw that pulls the fabric through the machine) would scuff the fabric, which again could not be repaired.
I also found that it did not press well.
It was difficult to press sharp folds in the fabric, and it would bounce back. Pressing harder only made for pressing marks on the edges, resembling long-term wear, which showed up lighter against the fabric.
All in all it was proving to be a very unsatisfactory fabric to work with.
Finally, it was quite weighty – around 300gsm – so was making for a hefty garment, a bit heavier than I had planned.
So, to cut my losses, shelved this version and looked around for some alternative fabric to make on of the other Inverness Capes Pertwee wore.
Luckily I hadn’t bought the moleskin specially, so it didn’t owe me anything, but it was a good lesson in buying the right type of material and understanding how it will handle.
Posted by Steven Ricks Tailoring at 22:07